You are here: Home / Archives for chef edna lewis

What 5 things do you need to know about soul food? 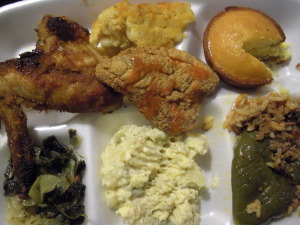 This short list addresses some of my most asked questions when it comes to soul food. Why do you need to know them? Well, you might not need to know them right now, but you may want to check them out and stash them away for future reference! You never know when you may have a soul food trivia question on Jeopardy! 🙂

When people say “soul food” exactly what are they talking about? Does soul food only belong to one culture or is it cross-cultural and world wide? Well the term “soul food” was born in the soulful 60s – when everything in the black community had soul! It didn’t matter if it was the music, the people or the food – it all had soul! Today, soul music is now “old school” and the soul brothers and soul sisters are now Grand and Great-Grand parents. The one soulful term that still endures today is soul food!

The term refers to food that can find it’s origins in the cotton fields and plantations of the South. It was simple food, prepared with care. It was prepared by slaves and eaten by southern plantation owners, their families and friends. Leftovers were thrown away, given to the animals or scavenged by the slaves. From theses humble beginning a cuisine that some say is the only truly American cuisine that exists in this country was born. Slaves saved the tops of vegetables like turnips and hunted for small game like rabbit, groundhog and turtle.  Fishing also provided much needed protein which could also be smoke dried or salted and preserved.

The top five soul food dishes in no particular order and in my personal opinion are, macaroni & cheese, collard greens, candied sweet potatoes, corn bread and fried chicken! As I said, this is my personal opinion and not the result of a poll or survey of the top 5 soul food dishes in America! Please notice that there is only one (1) meat dish listed in the top 5. Don’t believe the hype about soul food being bad for you because of all the meat people eat. Black people never did eat hugh amounts of meat! We couldn’t afford it! It was always scarce which is why soul food has always been “sides” focused!

The real secret to making soul food like mom & grandma used to cook, is knowing how to clean, season and cook it! Believe me when I say that everybody doesn’t know how to clean chitlins and everybody doesn’t know how to cook chitlins!  As one of the original members of “soul food”, chitlins are now often considered a delicacy because most people don’t have the time or the know how to prepare them! If prepared properly, chitlins are one of the most delicious soul food dishes you will ever eat!

3. Are sweet potatoes and yams the same thing?

No – yams are yams and sweet potatoes are tubers or potatoes.  I found a great article that offers an explanation of the difference between sweet potatoes and yams on a website called “Everyday Mysteries” which belongs to the Library of Congress:

In the United States soft and firm are the two varieties of sweet  potatoes. Skin color and flesh colors are varied and can range from white to purple. Firm sweet potatoes stay firm when cooked and soft cook up soft and moist. African slaves called the soft sweet potatoes yams because they closely resembled African yams. The soft varieties of sweet potatoes are still referred to as yams. Today, the USDA requires labels with the term ‘yam’ to be accompanied by the term ‘sweet potato’. Basically – unless you specifically look for yams, which are usually found in farmers and international markets, you are probably eating sweet potatoes!(1)

4. Is soul food a cuisine that refers only to the food that originated in the American South created specifically by African slaves?

When “soul food” is referred to in America, it is a term coined or created in the 60’s that referred specifically to the food that had it’s roots in slavery. Today soul food has been elevated to it’s own special status thanks to the Sunday dinners, chicken shacks, rib joints, church dinners, family reunions, juke joints, fish frys and pig pickins that contributed along the way! Soul food may have originated from slavery food, but there are a great many differences between what soul food is today and what the slaves ate to survive.  You can believe that during slavery, our ancestors weren’t sitting around the plantation “throwin down” on Barbeque, fried chicken wings, macaroni and cheese, candied sweet potatoes and pound cake! I’m not saying that the food didn’t exist or that it wasn’t being created, prepared, served and eaten. I’m saying it wasn’t being eaten by us – until it was thrown away, if then!

What we call soul food today is the result of the way our ancestors were treated and what they were forced to eat but on a highly evolved level with a lot of additions and a lot more meat! They were given the worst of it and they made the best of it! Soul food reaches far beyond the cuisine of the deep south that was created and perfected by slaves. Every culture has soul food! Some call it peasant food, comfort food, country food or just plain old food! Every culture has it and every culture embraces it! For Polish people, it may be Haluski, for Moroccans it may be Harira and for Jamaicans it may be ackee and salt fish.  The real point is, we all have food that takes us back to our roots! Food that holds real, comforting and intimate memories of from whence we came!

5. Is soul food in America a dying cuisine?

Within the last 20 years, cooking, something that in America in general and the South specifically, was the work of slaves and then later domestic workers, has become very mainstream. Due to the popularity of television food shows, the internet focus on food and recipe sites and our love affair with food in general, there is money being made hand over fist in the food industry! But who’s in the kitchen? The same people who have always been there since the beginning? Absolutely not! You will be hard pressed to find a black chef on TV let alone with their own show! In fact even today  I can count the shows featuring black chefs on one hand!

Looks like once again we’ve fallen from grace to grass. Once again, as soon as the worth of something is discovered, we are “quietly” removed and not spoken of, like we were never here, there or anywhere!  As if we never created and originated this truly American cuisine! Simply put – we’ve been replaced! This is very obvious with soul food! First of all, it’s not referred to as soul food – ever, even on food shows! The menu can consist of fried chicken, chitlins, ribs, macaroni & cheese, collard greens and corn bread, the words “soul food” NEVER escapes the lips of the shows chef/host! It’s Southern Food or Comfort Food or maybe even Country Food, but never ever Soul Food!

What also happens is that credit is never given to those who originated the cuisine! The host gives credit alright, but it goes to their Grandma Moses or Uncle Bud or Mama May I, but never any mention of the people who actually taught their relatives how to fix those dishes! Once again, history is abused and trampled under foot! I know, I know, since the slaves were not permitted to learn to read and write, they could not write down recipes! But recipes were written, they just were not written by the slaves! They were written by the mistresses of the house who then proceeded to take credit for those recipes! But if you think about it, the person who owned the recipe, owned the person who created it so to them it was their recipe. They didn’t consider it wrong to take credit for what belonged to them through ownership. But now we know that it was wrong so how can we ensure that the right people get the credit?

As people continue to take credit for every grit and green recipe they can find, southern food pioneers like Chef Edna Lewis and our other ancestors  who literally slaved over this food, are ignored or simply never mentioned! Now all of a sudden, every Chef on TV cooks grits, beans and greens, and let’s not forget corn bread! They’re fixing gumbo, frying hush puppies and cooking tripe. It’s up to each of us to research, remember and honor our own culinary heritage. If we don’t, just like we can’t trace our ancestral roots back to the land of our ancestors, we will not be able to trace our culinary roots back to those who really created the dishes and recipes.

African American chef and historian Edna Lewis documented the fact that unless something is done, the history of southern food and how it was grown, cooked and served will be forgotten forever. She co-founded, The Society for the Preservation and Revitalization of Southern Food, to try to ensure that those ways be preserved for future generations to know, learn and understand. And even that institution has been replaced and given a new name. It’s now called Southern Foodways, even though it has merged with the organization Ms. Lewis helped to co-found. Ms. Lewis is no longer with us so again, we must be careful to protect and preserve what she started because we want to make sure that those who should get the credit!

In closing I will say that yes, Soul Food is alive and well in America, it’s just quietly being slowly losing it’s roots and it’s culture, dish by dish! The next time your turn on your favorite cooking show and you see the Chef/Host making his or her Aunt Carly’s sweet potato pie recipe, just remember, you’ve been warned!

(1) http://www.loc.gov/rr/scitech/mysteries/sweetpotato.html. Everyday Mysteries Fun Science Facts From The Library of Congress. What is the difference between sweet potatoes and yams? November 23, 2012. April 11, 2015.