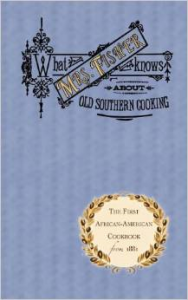 A former slave who lived for a time after the civil war in Mobile Alabama, Abby Fisher became a Chef when she and her husband were freed (emancipated) and moved to San Francisco California in the late 1870s. Abby and Alexander Fisher had 11 children. Her cookbook, “What Mrs. Fisher Knows About Old Southern cooking”,  is believed to be the oldest cookbook by an African American in existence. It was published in 1881. Chef Fisher and her husband were both illiterate but she was known to be a talented, sought after Chef.  Abby Fisher is also credited with being one of the early pioneers in the use of precision ingreditent measurements in her recipes. In some recipes she uses measurements such as quarts, pounds, gallons, tablespoons and even teaspoons and half-teaspoons, which is the type of recipe we are used to today. The recipe I used from Mrs. Fisher’s book below, is more traditional of the time and does not use standard measurements.  Abby Fisher’s cookbook was obviously transcribed by another person but “What Mrs. Fisher Knows…” is considered by many to be the original soul food cookbook, with recipes for beat biscuits, plantation cornbread, creole chow chow, oyster gumbo soup, and many other traditional dishes.  Mrs. Fisher was awarded two medals at the San Francisco Mechanics’ Institute Fair, 1880, for best Pickles and Sauces and best assortment of Jellies and Preserves.  Mrs. Fisher says in her Preface and Apology: “The publication of a book on my knowledge and experience of Southern Cooking, Pickle and Jelly Making, has been frequently asked of me by my lady friends and patrons in San Francisco and Oakland, and also by ladies of Sacramento during the State Fair in 1879.” The table of contents in this important book reads a little like the alphabet…

Below is an original recipe from Chef Fisher’s cookbook:

I love this recipe because it’s all open to interpretation! Other than 2 eggs, you have no idea how much of anything Chef Fisher used of any ingredient! Pure old school cooking by eye and feeling! Enjoy!!!

Have crabs well boiled in salt and water, then pick them clean from the shell; chop fine; take the large end of a piece of celery and grate into the crab; chop with crab a small piece of onion fine; mix half a teacup of fine powdered cracker into crab; season with pepper and salt, also the least bit of fine red pepper, as crabs should be seasoned high to be nice.  Have your lard hot, and fry just before wanted at table.  Beat two eggs, dip croquettes in the egg, roll in powdered crackers before frying; make them oblong shaped.

A reprinted copy of Mrs. Fisher’s cookbook, which can be purchased by clicking the book cover below:

Find a sponsor for your web site. Get paid for your great content. shareasale.com.
Previous Post: « Sister Beckys 7-Up Pound Cake
Next Post: Pigs Feet (AKA Trotters) »